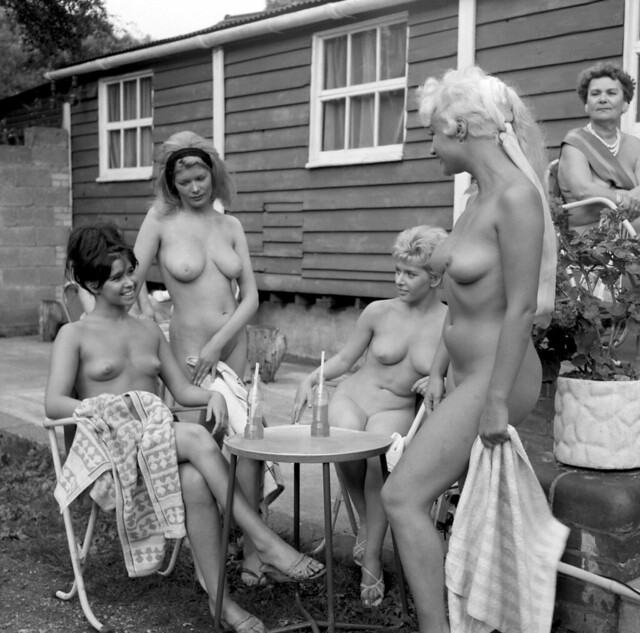 A wonderful original shot taken by Douglas Webb of Jackie Salt, Bridget Leonard, Angela Jones and Pamela Green posing on the set of ‘Naked as Nature Intended’ filmed by Harrison Marks in 1961. This shot, which is one of two I have was taken at the Spielplatz Naturist Club in Bricket Wood, near Watford during the shooting of the NANI film. The scenes at the club can be seen featured towards the end of the film, where all four girls are seen in and around the Naturist club, along with other members. Pam was a member of there for several years before this was shot and there are some great posts of her at Speilplatz, along with other articles about the club over on her official site here.

I’m loving the strategically placed hands and towels to cover the girls modesty in this shot and the older lady in the background wearing the sash is Mrs. Dorothy Macaskie a club regular and wife of the founder of the club Charles Macaskie. The bottles of drinks on the table are Fanta and no wonder Pam never had any tan lines if she was a member of this club 🙂 Thanks to Yak for the additional information in the comments below!

I just seen the latest post over on The Official Pamela Green Site and got rather excited to see 6 lobby cards for the 1961 HM Film ‘As Nature Intended’  One of my other hobbies other than this, was that I used to collect vintage lobby cards.  Lobby cards are similar to film posters but smaller, usually 11in × 14in (28 cm × 36 cm) and as the name suggests were usually displayed in Cinema lobbies to advertise the latest and upcoming film releases.

Lobby cards are collected and their value depends on their age, quality, and popularity. Typically issued in sets of eight, each featuring a different scene from the film. In unusual circumstances, some releases were promoted with larger (12 cards) or smaller sets (6 cards).

My collection includes 1960’s films, such as The Great Escape, The Thomas Crown Affair and several James Bond sets from different films.  I have newer sets from Star Wars, Leon and many others.  Several are framed and sit on my study wall as I type this!

Below are some examples of the NANI Lobby Cards, but do go and see the full set … Here Film Poster Advertising The NANI Film Showing at the Spielplatz Naturist Club, Hertfordshire, Where Some of NANI Was Filmed. International Japanese Version Avertising The Film – Love The Clever Editing Making it Look Like Pamela Green is Wearing a Bra! Finally on a Double Bill Showing With The ‘Secrets of a Windmill Girl’ & Love The Side Heading of a Slap & Tickle Double Bill!
1+
No comments

Documenting the film of Harrison Marks’ nudist feature Naked as Nature Intended. A hardback book covering behind the scenes exclusives and never before seen pictures from the film, with text from Pamela Green’s unpublished biography. This book is available to order online from Amazon and more details can be found on Pamela Green: Never Knowingly Overdressed 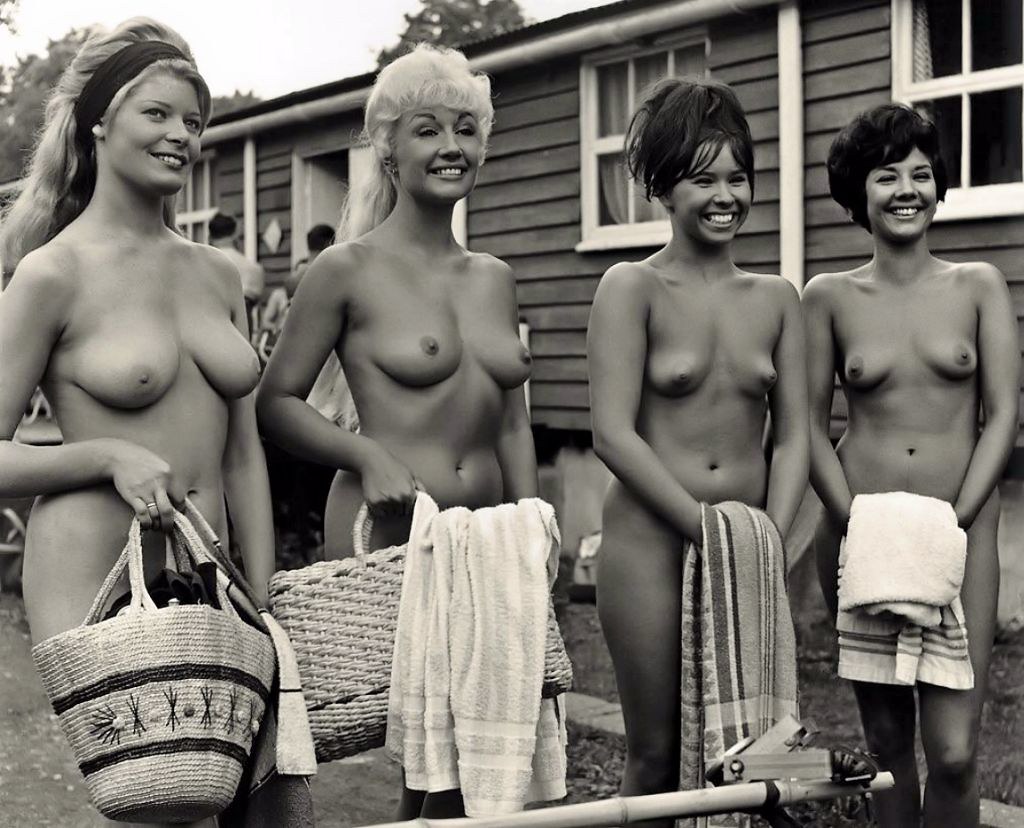 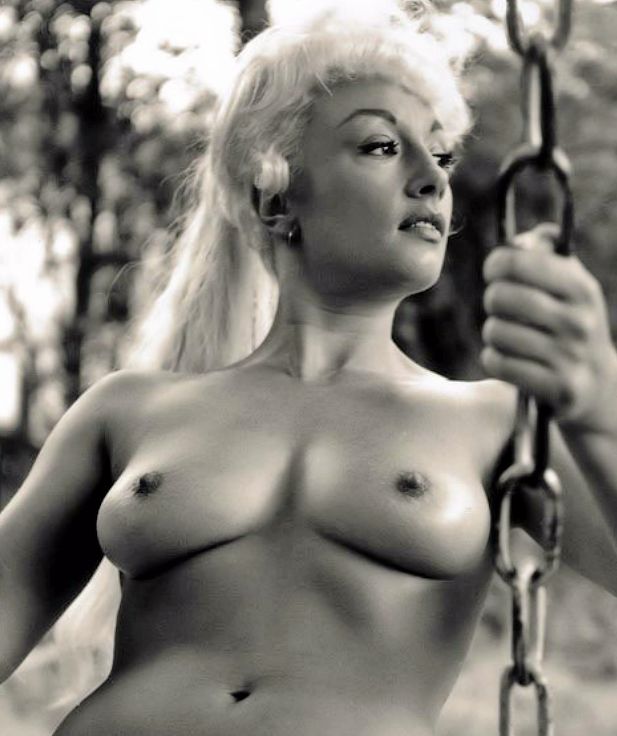 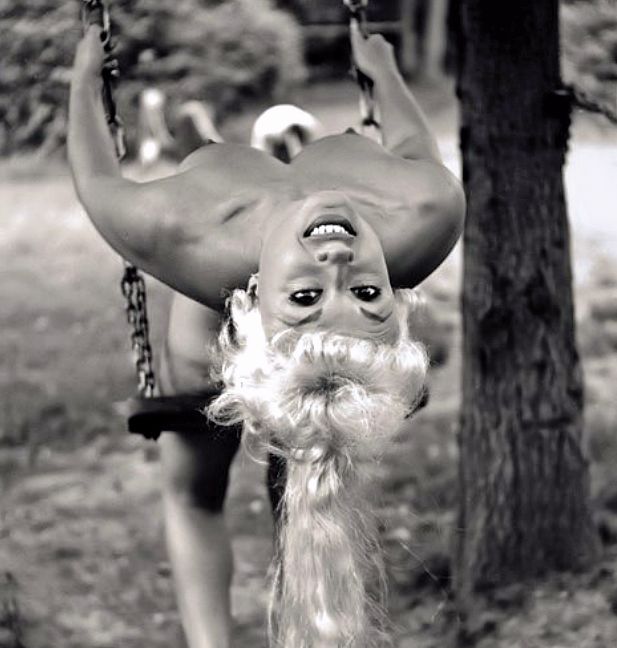 Pamela Relaxing on a Swing Between Takes
3+
No comments 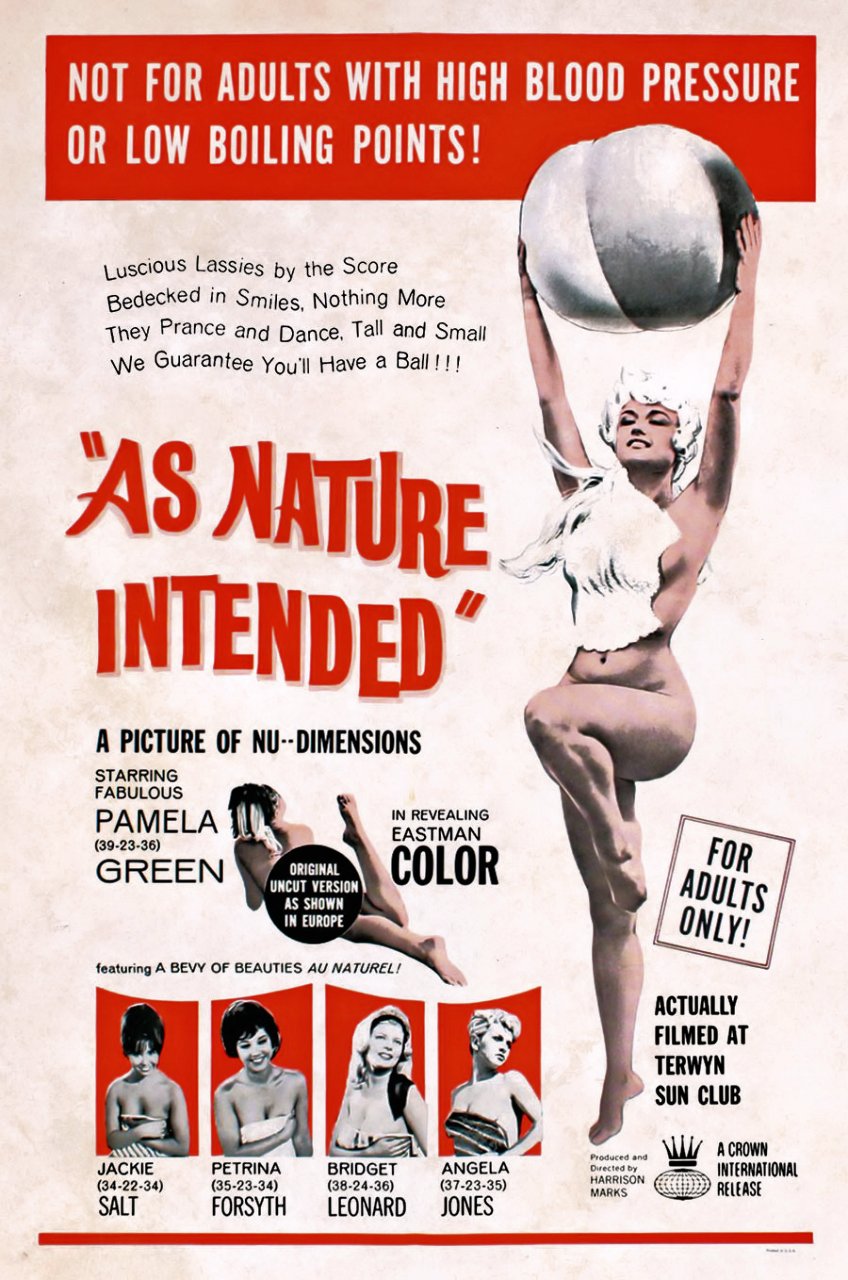 ‘Naked’ – As Nature Intended Film Poster (1961)
A International poster for the Harrison Marks 35mm film that lasted an hour and starred Pamela Green, Jackie Salt Angela Jones and others.  Love the fact the poster includes the vital statistics of all the girls.  A full description of the film and more can be found over on the official Pamela Green Website
3+
error: Alert: Content is protected !!