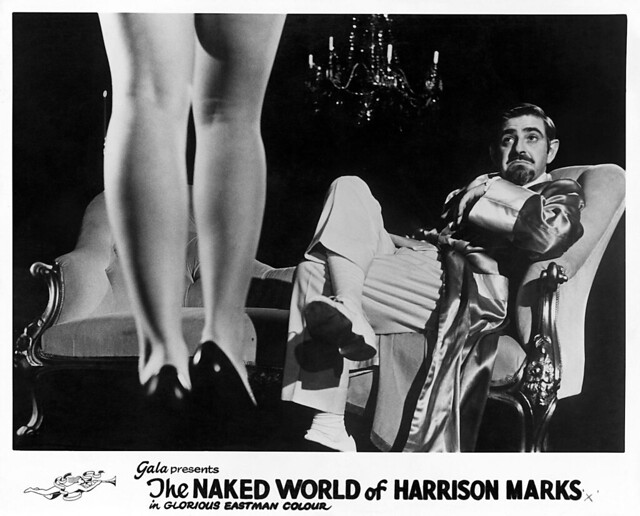 A scan of an original lobby card for the 1966 film ‘The Naked World of Harrison Marks’. I recently bought a full set of these lobby cards that would have appeared in the foyer of cinema’s showing the film. Considering the age and usage of these cards they are in excellent condition, but I’ve obviously tidied them up slightly.

I used to collect old lobby cards a while back from some of my old favourite films such as The Great Escape, Leon, Bond Films and others. As you can imaging getting hold of them wasn’t easy or cheap, but now I have a few more to add to the collection.

From the set of 5 this has to be one of my favourites, not only does it feature Harrison Marks, but probably typifies his life as a photographer and how he auditioned his models. You can just imagine him asking his models to strip and show off their body as he looks on with a similar look on his face. The views he must have witnessed from his casting couch 😉

I just seen the latest post over on The Official Pamela Green Site and got rather excited to see 6 lobby cards for the 1961 HM Film ‘As Nature Intended’  One of my other hobbies other than this, was that I used to collect vintage lobby cards.  Lobby cards are similar to film posters but smaller, usually 11in × 14in (28 cm × 36 cm) and as the name suggests were usually displayed in Cinema lobbies to advertise the latest and upcoming film releases.

Lobby cards are collected and their value depends on their age, quality, and popularity. Typically issued in sets of eight, each featuring a different scene from the film. In unusual circumstances, some releases were promoted with larger (12 cards) or smaller sets (6 cards).

My collection includes 1960’s films, such as The Great Escape, The Thomas Crown Affair and several James Bond sets from different films.  I have newer sets from Star Wars, Leon and many others.  Several are framed and sit on my study wall as I type this!

Below are some examples of the NANI Lobby Cards, but do go and see the full set … Here