4 Comments
For locations used for glamour shoots by GHM and others I’ve always been fascinated by Ewhurst Manor it’s location, background, grounds and rooms that were used. As I’ve posted more and more shots, it has also become obvious that this wasn’t the only location that was used and the name Walden Manor started to appear. Knowing very little about the place or location I thought I’d ask Terry as he mentioned it on one of his mails and he has kindly replied with this fascinating insight into Walden and a superb image!
It’s an old Manor House near Orpington in Kent. It was owned by a lovely couple in their 60’s, name of Janet and Jim Clark. Working there was a joy as Janet, who had spent most of her life in Mexico City was a great cook and always provided the most fabulous lunches. The only problem was that after eating too much nobody wanted to work in the afternoon. Walden Manor I think I am correct in saying was only used by GHM, Ed Alexander, Ken Williams and myself for glamour shoots although I believe they let it out to film and advertising companies. The great advantage to me was that it was nearly always available at short notice unlike Ewhurst who had so many clients it often needed to be booked well in advance. That was often difficult with the glamour girls who tended to be here today and gone tomorrow. There was a large entrance hall and several bedrooms including a four poster bed. The whole place was filled with antiques, a grand piano and a cellar.
One day GHM booked the place and turned up with a young couple telling Janet he wanted to take some romantic pix of them. At some point in the afternoon Janet happened to look out of one of the bedroom windows to see George on the front lawn taking close ups of the young couple having vigorous sex. That was too much for Janet and she refused to let him work there again!
When I was still working for Russell we had a 4 day shoot there making a film called the Hell Fire Club. A lot of the scenes were filmed in the cellar and in one particular shot I had to film two men dressed as Monks carrying a naked girl down the stairs. The wood was far more rotten than any realised and the whole lot came crashing down, luckily not causing any great damage to our actors. This meant the whole crew were now stuck in the cellar. After about 30 minutes of shouting, Jim finally turned up with a ladder and we all climbed out. We still had more of the film to shoot but some of he girls found it difficult going up and down the ladder when they were half naked. Personally I thought it was good fun!
I have attached a photo of us all in the entrance hall of Walden, taken by Jim Clark. 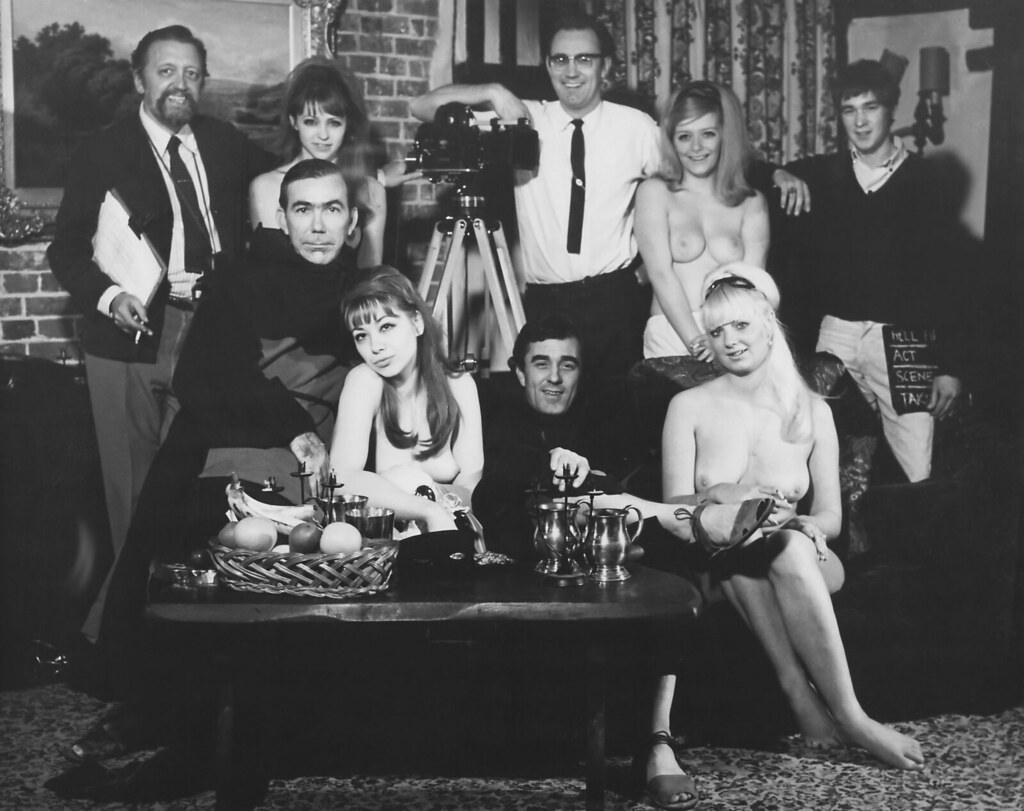 Back row: Russell Gay, Samantha Bond, Terry Sparks, Cindy Neal, John (Assistant to Terry)
Front row: Milt (actor), Maya Zell, Malcolm (actor) and April Dawson
I love this as not your typical shot and good to see Terry in the photo. Great to see the models too, although April Dawson is a new name to me and Milt the actor looks familiar?
Thanks Terry 🙂
error: