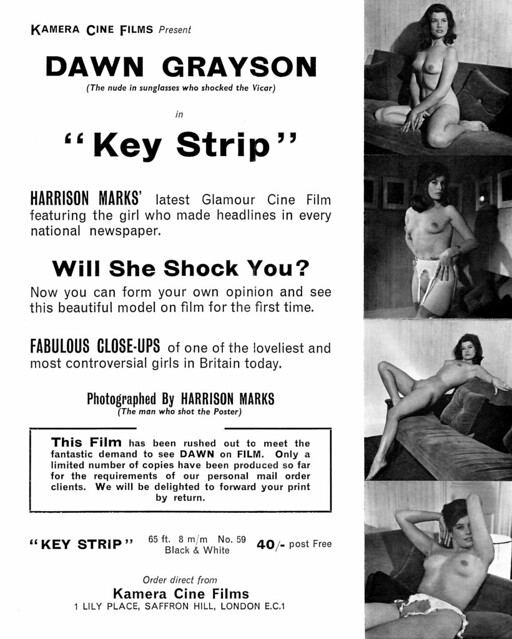 I always like it when something slightly different comes my way, especially if it includes one of my favourite models such as Dawn Grayson. This is an original copy of a 10 x 8 promo sheet from Kamera Cine Films advertising the first Harrison Marks glamour film featuring Dawn Grayson in ‘Key Strip’. Thanks to Paul from Firebird Records who sent this and another promo sheet over and obviously sent to past customers as this was folded over and in it’s original envelope.

A great bit of vintage memorabilia from Harrison Marks, just a shame I don’t have the film to accompany it as it’s missing from my list of Dawn films 🙁 Dawn Grayson by Harrison Marks on the ‘Studio set’ at Lily Place studio’s probably mid 1960’s.  The blonde wig was worn when she appeared under the name ‘Liza Martelle’ and the pink underwear set seems to have been worn by other models such as Nicky Stevens and Julie Collins to name two.
3+
No comments Liza Martelle (Dawn Grayson) – We know GHM had a propensity to give his models aliases when they modelled in wigs, such as Rita Landre (Pam Green) and Mary Stephan (Caroline Coon). What I didn’t know is that Dawn Grayson had one as well when modelling in the blonde wig above! Apparently she was known as Liza Martelle, a beautiful strip artist from the crazy horse in Paris.
GHM revealed this in an interview for Fiesta magazine in 1976 called ‘ Harrison Marks Rides Again!’.  He also said that she was in London for an appearance and due to his sheer charm and youthful sex appeal he was lucky enough to get her before his camera … and other places!
Well I never! That’s the first time I have come across Liza Martelle and a photo similar to the one above appears with those comments.  So, unless there is another Liza Martelle or the photo was wrong, then it’s Dawn Grayson 🙂
3+
No comments A Dawn Grayson still of her in blonde wig taken during the shooting of the Harrison Marks 8mm film ‘Key Strip’.  This was shot on the ‘Hollywood’ set at Lily Place Studios in 1964.
2+
error: Alert: Content is protected !!