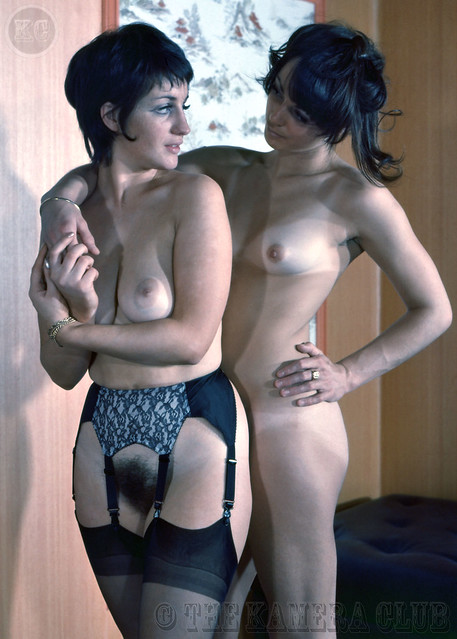 After my post about Eva Nieman and ‘The Amorous Masseur’ I found an original still from the other Harrison Marks Glamour Film ‘The Amorous Masseuse’ in my collection, but I didn’t realize it was from that film until now. This film featured Yvonne Paul (left) and Toni Lee (right) and was again produced in a black and white version and a Super 8 colour version from Ekstase film No.E 317 titled Die Liebesvolle Masseuse. The summary of the film lists `Toni Lee and Yvonne Paulle in The Amorous Masseuse` – A busty female wearing white knee-high boots exposes her nude bum while preparing a bath, the bath is round and recessed into the floor. A second female enters and steps into the bath, the two females wash, caress and kiss each-other. Full nudity, but again both versions seem to be softcore versions.

I love Yvonne in this shot with her very 1960’s hair style and wearing suspender belt and black stockings showing off that beautiful full bush. Sorry, but I don’t have a copy of either version of the film, unless someone can send me a copy to add?

Incidentally Yvonne also starred in the 1971 GHM film Pattern of Evil, also known as Fornicon, plus an edited version in 1979 that included hardcore scenes titled Blue Perfume. She then went on to star in the ‘Benny Hill Show’ and in 1971 started up her own modelling agency called ‘Blondes’ that had the likes of Maria Whittaker on the books.