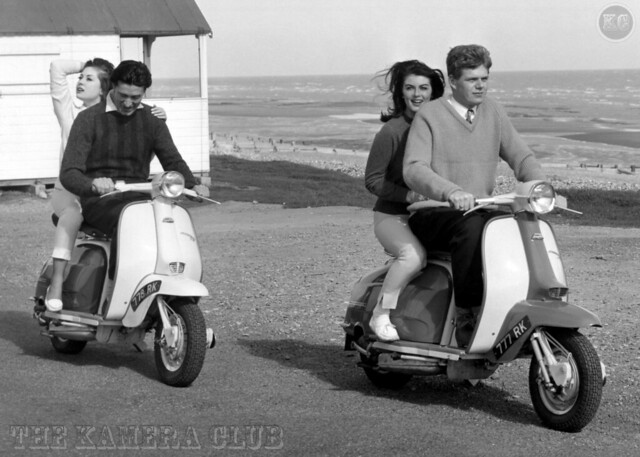 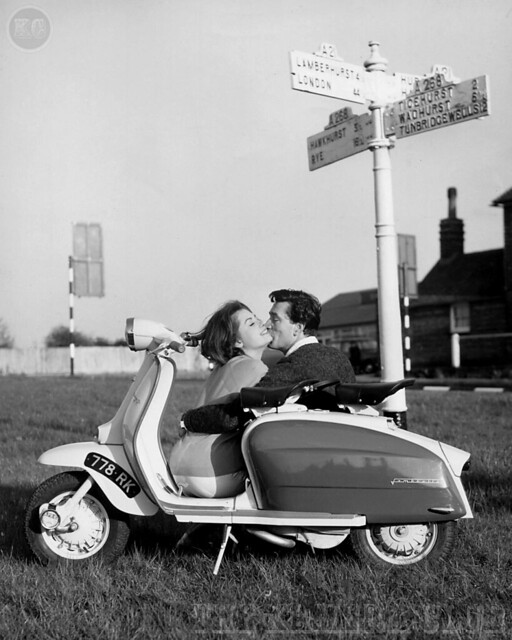 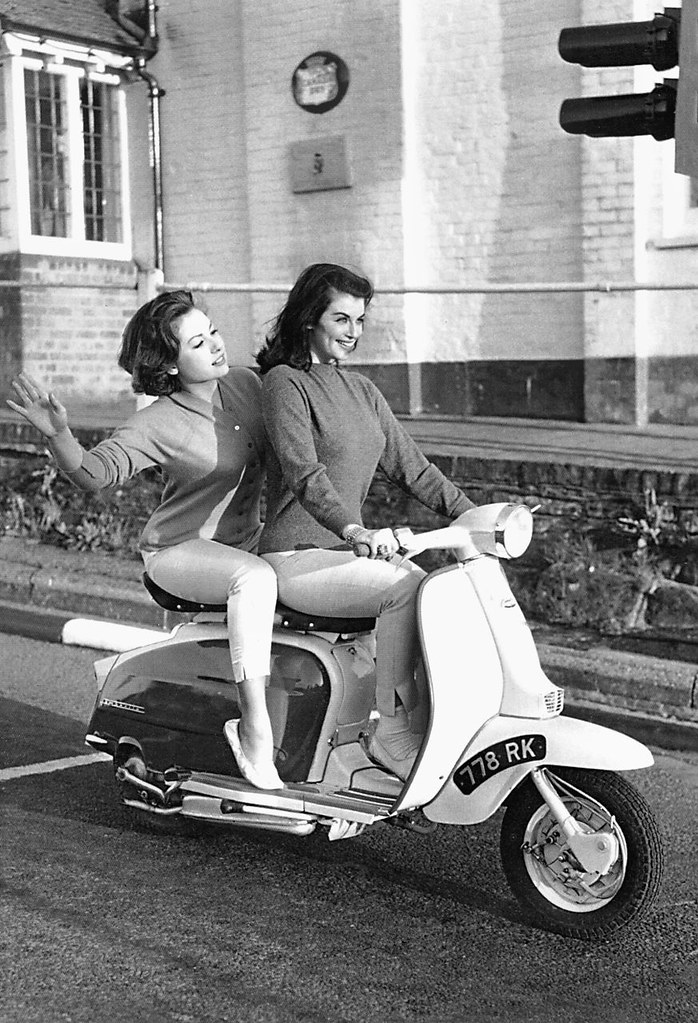 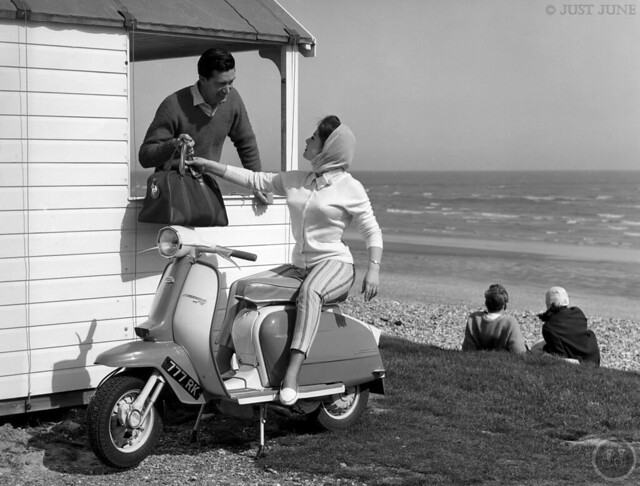 Another promotional shot by London photo agency Cowderoy & Moss Ltd featuring June posing on a Lambretta Scooter. This time we see June down at the beach, sat astride the scooter in a fetching pair of striped pants, white cardigan top and scarf, as she hands off her bag to a chap in a beach hut! I always enjoy seeing this different side of June and her non glamour work during the height of her career. It seems like she had enjoyed posing on Scooters and cars a lot 🙂 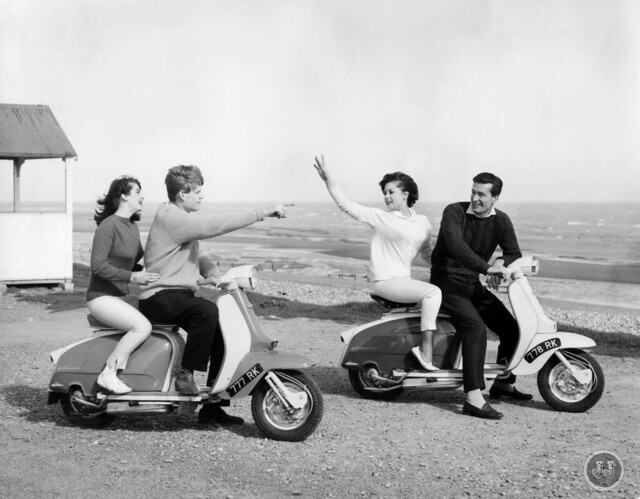 When I found this first shot of June and Eve Eden posing on a Lambretta Scooter I had hoped I would find more, but had never found any until now! I saw this shot several weeks ago being sold over on eBay by Teri Martine, but knew it would be popular so never bid on it. Fortunately for me John W did and he won it along with a few others, so I now have a copy to share.

The text that accompanied this image from Teri on eBay suggested that it was June posing on the back of a British Lambretta scooter and was done for the company that made the scooters and quite possible it was used for one of their ads in a magazine. John also sent me some other shots of June posing in the studio on a Lambretta for the company Cowderoy & Moss Ltd, so this could also be for them?

The other model is Eve Eden who did another commercial with June on a scooter and potentially that was the first shot of the two I posted. A fantastic piece of memorabilia and thanks to John for sending me a copy of this image featuring two of my favourite models. Surprisingly the first shot of June and Eve is one of my most popular images and they even had their clothes on! 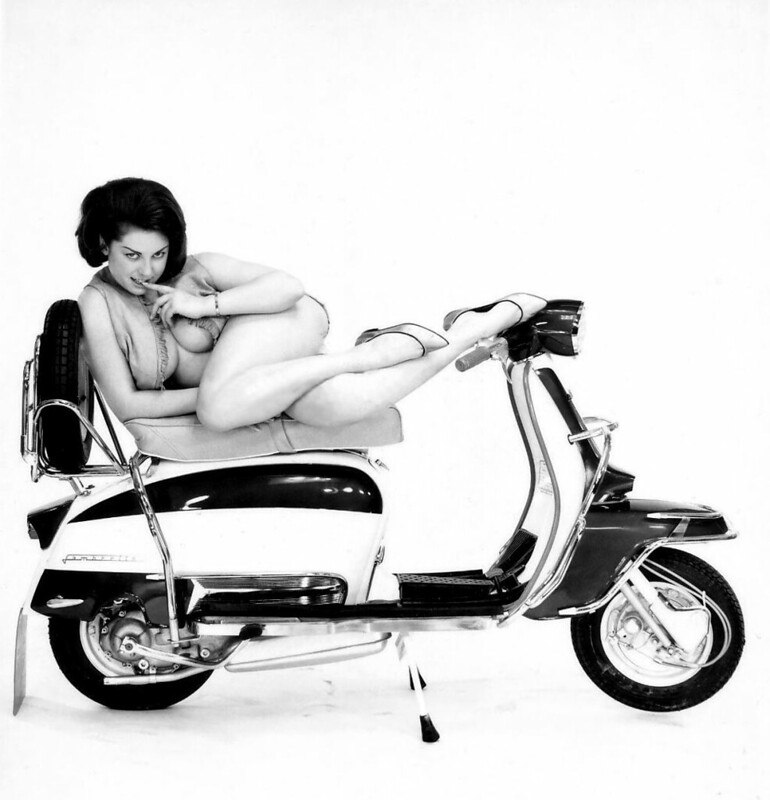 Would you believe that one of the top 5 most viewed posts on this site also includes a Lambretta scooter and June with Eve Eden and they’re not even naked! So he is another studio shot of June posing on a Lambretta, this time showing us a little more in the way of flesh, but still sort of riding/mounting the Lambretta.  I have one more shot of June with a Lambretta to post from John, but this is a much more formal shot. I bet this shot sold no end of these scooters with June posing on it like that!