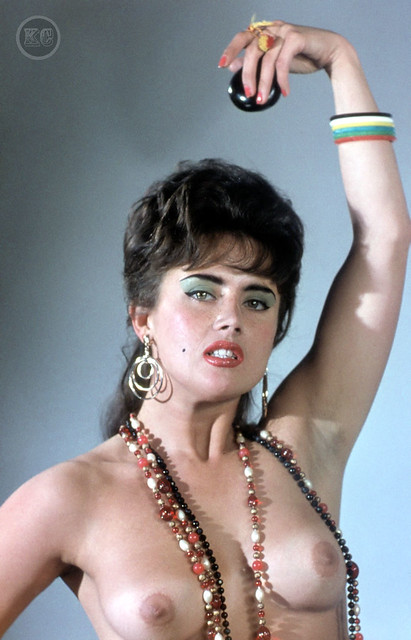 I recently won a set of 20 slides of Sophia Dawn over on eBay and this is the first scan of those slides. Of the 20 slides there are 4 different themes, but all seen to be taken at the same session. This shot is from a Spanish themed set of 8 slides that feature a topless Sophia Dawn in yellow Flamenco dress and colourful bead necklace. Most of the slides are close up shots similar to this, with the odd full length shot, but the quality of all is excellent for their age, with very little restoration required.

It wasn’t until I saw this set that I realized that Sophia looked very much like an ex girlfriend of mine, both facially (without the beauty spot) and in her frame and boobs. Loving the green eye make-up and dark eye liner, which all adds to the look of this shot.

Note: This image is scanned from an original negative and subject to this copyright notice, but can be individually shared as long as the image remains unaltered and this website is acknowledged as the source.

8+
No comments
More June images from the great John W archive!  Not only does John provide me with the ‘normal’ (read topless/nude as normal) type of June image, but he has also provided me with some different from the norm images of June. These give an insight into the life of June Palmer outside of her modelling work and the following images fall into that category.
These images are of June Palmer in a blue traditional Spanish dress attending the Chelsea Wine Festival in 1962.  The first two are originals from John, but the last is common on the Internet, but obviously from the same event. The most interesting image is probably the middle one where she is posing for an official photo at the Chelsea wine fair with Rupert Davies and Paul Carpenter, both renowned actors of the time.  Rupert Davies with his pipe was best known for his portrayal of ‘Maigret’ in the BBC series, which ran for 52 episodes between 1960 and 1963.
I suppose this could be classed as one of those ‘media’ events that today are so common and every actor or ‘star’ turns up for to be seen in the press.  Back then it seems to have had a little more class, especially if it involved JP!

On closer inspection the middle photo may also have been taken at a different time than the other two.  June seems to be wearing different white shoes and her hairstyle differs, but still worth keeping together.


Note: These are original images and subject to this copyright notice, but can be individually shared as long as the images remain unaltered and this website is acknowledged as the source.
2+
error: Alert: Content is protected !!