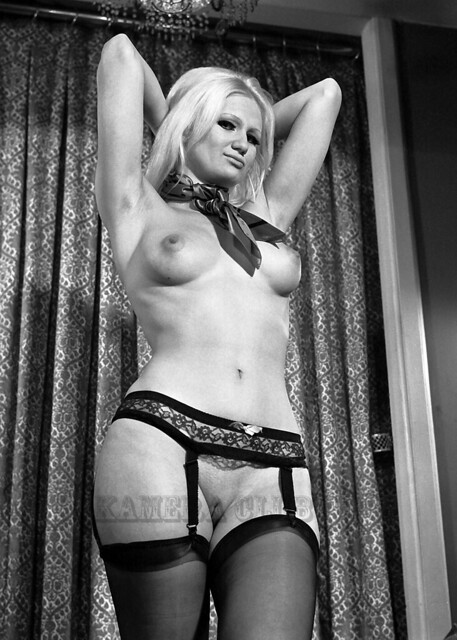 A second shot of Eva Nieman from the set of the Harrison Marks glamour film ‘The Amorous Masseur’. A beautifully uncensored shot of Eva posing in black stockings and suspender belt that frames that smooth pussy perfectly 🙂

Coincidentally I have also received a new set of 35mm negatives of Eva from Paul from Firebird. Not as revealing as this shot, but equally as enjoyable and more of them to come in future posts.

I thought I’d cheer everyone up today with a new glamour film by Harrison Marks for your pleasure. This is a later film from his catalogue and comes from the series titled ‘Dolly Birds of Britain’

This one is titled ‘Cheryl’ and features the fabulous figure of Cheryl Peters. Not much of a story or explanation required other than Cheryl seems to be entertaining a friend in very little. I’ve done a few screen caps from the film and finally a big thank you must go to MadMax for sharing his huge GHM film collection with me and of course the site.

Members can enjoy the film below ;){member]

Time for a new film and this time an early Harrison Marks film featuring Rona Scott in Cats Cradle.

At just under 4 minutes Cats Cradle isn’t very long, but is very simple in that it features Rona on the Loft Set doing a strip before going to bed, before being further interrupted by a cat. Very much a early striptease and titillation 8mm film, but you do get to see glimpses of Rona’s fabulous body as she strips and those magnificent tits! This was the second film published by Harrison Marks under the Kamera Cine Films label and as titled HM.002 Cats Cradle.

Long before my break there was a vote on the next set of glamour films people wished to see posted, with four new films up for the vote. The results were as follows with The Casting Couch (Angela Duncan) – 33%, Bathing Beauty (Ann Austin) – 25%, Turn Me On! (Wanda Liddell) – 22% and Session with Cleo (Cleo Simmonds) – 20%. I’ve already posted the Casting Couch for all to enjoy, so time for the second place film featuring Ann Austin.

Bathing Beauty is just over 4 minutes long and is very simple in that it features Ann waking in bed and enjoying a free sample of some bubble bath with a twist at the end! It’s more of a titillation film (pun intended!) rather than full on nudity, but you do get to see plenty of Ann’s magnificent chest. Not a Harrison Marks film and no idea who produced it, but it’s Ann Austin in a rare film 🙂