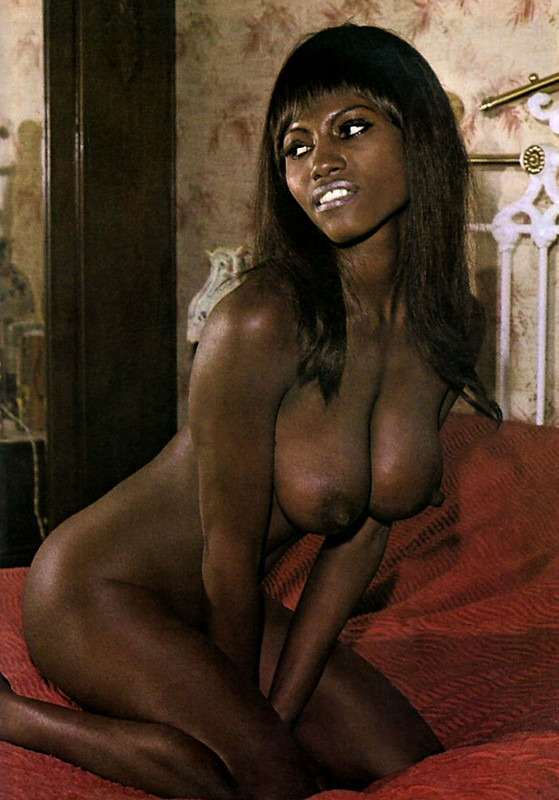 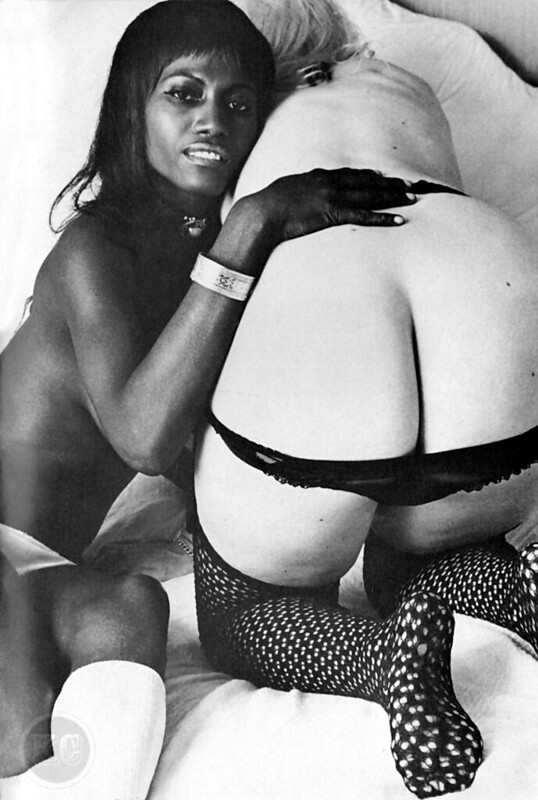 Another page from Nylon Flash No.19 of Sylvia Bayo and friend stripping out of their underwear. The contrast of Sylvia in white panties against the other model in black panties works perfectly. The opposing underwear colours and skin tones highlight the assets of each other throughout and here you can see the perfect example of black and white contrast, with Sylvia showing off her friends round white bum with black panties pulled down.

I mentioned a few weeks back that Colin from Cine Films 2 DVD was sending some glamour films from GHM and I posted the Rusty Gaynor film that he converted and sent. Well since then I’ve decided to expand my collection and start buying and collecting a few 8mm and 16mm glamour films by Harrison Marks and others.

My first experiment in this was I came across a couple of 400ft 8mm films on eBay featuring 4 GHM films. The first reel featured Maid to Satisfy and Amorous Masseur, the second reel included The Casting Couch and Cous-Cous. The second reel of film jumped out at me because it features two films with two of my favourite models, Angela Duncan in The Casting Couch and obviously Sylvia Bayo in Cous-Cous. So I took a risk and bid on the films and won them and they quickly turned up and to my untrained eye looked to be OK, but you never can tell with old 8mm films as to what the quality is like or even if they are the actual films!

So now it was time to use Colin and his service to convert the films to digital, so off they were sent last week and I awaited in anticipation. Well the files arrived in my inbox yesterday and thankfully they were the films advertised and they were complete, phew! As to the conversion, well I’m happy with the files considering I’ve not seen digital versions of these available anywhere else. For old films over 50 years old they were dirty and did have marks and lines appearing during the conversion, but to be honest the quality of the films is still very good and at a good size conversion rate, allowing me to make smaller versions for online.

So now I have a digital copies of Maid to Satisfy, Amorous Masseur, The Casting Couch and Cous-Cous 🙂 I still need to convert them for the site, but looking through the films I do love Cous-Cous and captured a few screen shots directly from the file to tease you with. It of course features Sylvia Bayo, but also includes Tara Lynn, Sue Roberts, Jenny Lane (short hair) and Virginia Jones. So look out as Cous-Cous is coming!

Finally a big thank you to Colin for the conversions and I would highly recommend his service if you need your own cine films converting. Now I just need to decide what to do with the original films as I no longer need them with digital copies, maybe resell them to fund some more film purchases!

Now for something completely different from my vintage glamour collection, a Toppan Top Stereo postcard featuring Sylvia Bayo. As you can see from the video it’s an image of Sylvia sat in white top and panties with white necklace, but when you tilt it you get another shot of her laying on her side topless! I remember as a kid seeing something similar to this produced as a set of postcards for Disney, but nothing this risque! I also vaguely remember seeing a postcard of a young girl dressed and topless using this same technique?

This was produced by Toppan Top Stereo and appropriately titled  – PS-10 Nude, Dangling Three Necklaces with copyright to Robert Cantieni and produced in Germany. When I saw it I immediately recognised it as Sylvia and it was only a few quid, so decided to get it as it was her. Something different as you will agree and not sure what to really do with it now, but thought it was worth a quick video to share here 🙂

As promised and as it’s also Friday, time for a little video 🙂 For your delight we have the 8mm film featuring the dark skinned beauty Sylvia Bayo in Mayfair Film 08-027 ‘Girl Friday’ and published in standard 8mm and super 8mm format. Sylvia Bayo (aka Lucienne Camille) featured in Mayfair magazine Vol.5 No.1 (Jan 1970) and the `Girl Friday` film gets advertised in the very same magazine.

I’ll leave you to enjoy the film, but the official synopsis on the film is ‘Sylvia Bayo – dusky, exotic, playing the part of an au pair girl in a bachelor flat – who extends her duties and is caught in the act by his girlfriend. As Mayfair girl of the month she brought an incredible ovation from readers.’

Again a big thank you to Soundtrack68 for sending me a copy of this film and the quality isn’t that bad, although I think it’s far too short and needs to have more shots of Sylvia nude in it!