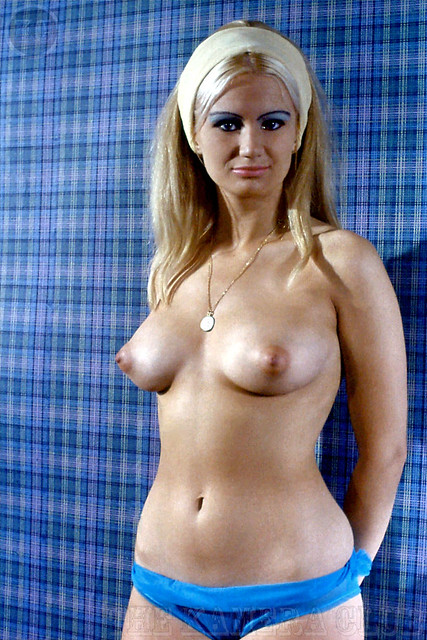 Time for another mystery model and another that’s cropped up a couple of times in different places! This mysterious blonde appears in the 1970’s Harrison Marks glamour film The Amorous Masseur (Top Image) published by Maximus International Ltd, but I have no idea who she is? I also have a set of 7 colour 35mm slides of the same model posing in the studio (Bottom Image) and until now hadn’t connected the two!

Again thanks to Ray I now have 3 uncensored shots of this mysterious blonde by Harrison Marks from The Amorous Masseur to add to the collection.  Whoever she is she has a stunning figure and more on show in both shots. Another added to the ever growing list of Unknown Models 🙂

Update: Thanks to Pirate Pete who identified the top image as a still from The Amorous Masseur and also sent me a copy 🙂

7+
No comments
There is a great review over on Gavcrimson’s blog about Aphrodisia, the 1970 glamour film from Harrison Marks, which came in two parts.  The first part came with the description – ‘A film featuring eight characters in sexual action to excite and amuse. A story in the 007 style with fabulous birds and sexy bad men including one virile young man called Captain X. Meet Cherry Doubleday, blonde innocent and beautiful, and a group of delectable girls’ What interested me was that ‘Captain X’ was played by none other than Emmett Hennessy, who contacted me and this site to see if I had a copy of Aphrodisia.  Unfortunately I hadn’t, but I’m glad to see Emmett got in contact with Gav and has been able to acquire a copy of the film he starred in.

Excellent review, so go take a read as I’m always amazed at the amount of details Gav manages to find!
0
error: Alert: Content is protected !!