Two more film strips from the black and white version of the glamour film ‘Castaway’ sent by John W. The first shows a close-up of a topless June, the second June of June sat on a towel rubbing suntan lotion all over herself.

What I’ve also noticed having looked at these and the colour version of ‘Castaway’ that these stills were also taken at the same time as June has the same jeans on!

Doing one of my usual trawls of the Internet for anything I don’t have June related I came across this very interesting bit of June Memorabilia over on Vintage Fetish. The one thing that has always been sketchy and up for debate is the date that June married Arthur Howell, as many sites including Wikipedia have it much later than it was. So to my surprise I found a copy of the actually marriage certificate over on Vintage Fetish, which I’ve included below. 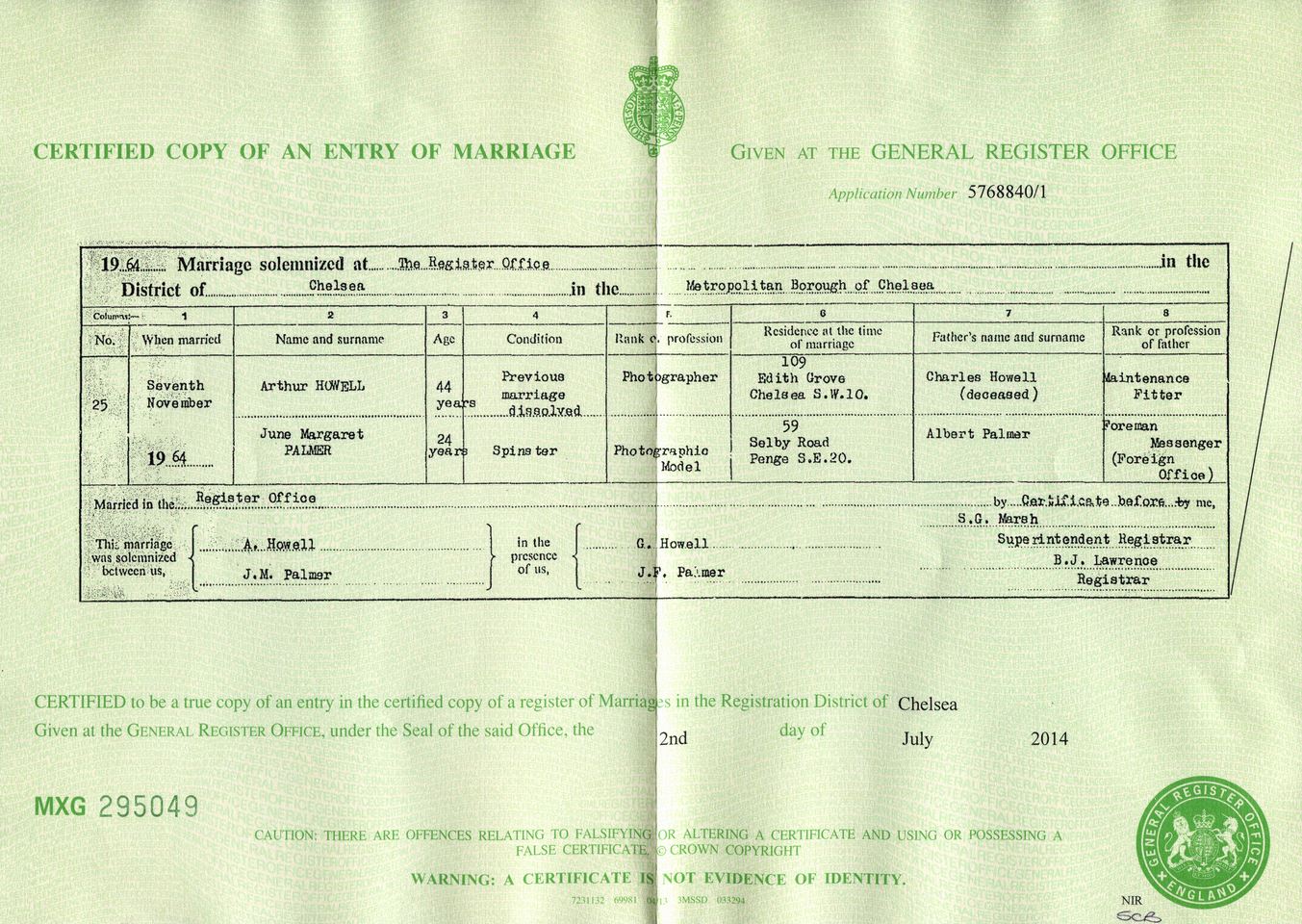 So we now know the actual date June married Arthur and that is was a lot earlier than originally thought and was back in 1964, so was actually married to Arthur for 36 years! Another unknown fact to me that has also come to light via this certificate is June’s middle name Margaret!

Thanks must go to Vintage Fetish for finding this information and sharing it with us all and do go take a look at their site, as it kept me busy for hours looking through the models and like June those that Modelled for Harrison Marks. Another photograph of June signed by her from Minimunster, this time a young nude June on a mixture of rugs! I think she must be a bigger fan of June than me!
No comments

Two more film strips from the black and white version of the glamour film ‘June in Orbit’ sent by John W. The first shows a close-up of a topless June, the second June and Teri Martine hanging onto a ladder in just their knickers as they are thrown around (or pretend to) by the spaceship.
No comments

A scan of an original piece of the 8mm cine film ‘June in Orbit’ by Arthur Howell.  These were strips of the black and white version of the film left to John W by Arthur, but only snippets not the entire film. I do however have a copy of the colour version, which also starred June’s friend Teri Martine and I’ll try and get a copy on-line for your viewing pleasure soon.

Note: This is an original image and subject to this copyright notice, but can be individually shared as long as the image remains unaltered and this website is acknowledged as the source.
error: Alert: Content is protected !!